Brown Mamas' Blog Uncategorized Just Say NO! 4 Strategies to Teach Your Kid to Embrace the N-Word

After watching the 20-minute “listen, Linda” conversation between a 3-year-old kid and his mom, I decided to write this.  I know it was comical and judging from his comfort with getting “pow-pows,” his mom might not be having that on a daily basis.  But, it did get me thinking about how hard it is getting through the terrible twos and adventurous threes when all your little one wants to hear is yes.  So, here are some strategies to assist mamas struggling with the n-word.

You can prep your children for the n-word by telling them before hand that the answer is no.  If you are anticipating a circumstance where your child will inevitably act out because they are told no, prep them for it.  I’ve said this before.  If you’re going in the store and you know Shawn is going to ask for a candy bar, tell him no beforehand.  You know what you’re mom used to say:

I ain’ t buying nothing when we go in this store, so don’t even ask.

That’s right get old school on him.  If you already know your kid is having a hard time with the n-word, there is no need to let their anticipation build up.  By delaying the inevitable, you will not only make the “no” fallout worse, but you are also giving them time to be strategic about their response to you.  Yes, your kid is already manipulating you.  Instead, you take the reins.

If you know you’re no is a little shaky, don’t make eye contact.  My Phillip.  I love him to death, but teaching him the n-word was like leading an unwilling camel to water.  He just didn’t get it.  I think that he could see a little hope in my eyes when I would tell him no.  So, I stopped looking at him, and it actually worked.  If I was washing the dishes and he wanted something he could not have, I would say no and keep washing the dishes.  He just started walking away.  Saying no and continuing on with whatever activity you are engaged in may signal to your little one that life goes on.  It tells your kid that no is now a part of the routine. He better just get used to it. 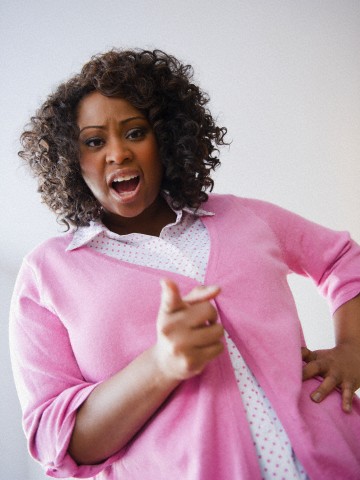 So it turns out that during the six-year gap between birthing my oldest son and my middle son my ‘mom look’ was losing it’s power.  I looked at myself in the mirror one day and gave myself the “mom look” and knew just why my two little ones weren’t paying me any attention. There was no raised eyebrow, or evil lip.  Just a scowl that looked halfway like a smile.  So, I had to change that.  Get in the mirror and practice it.  Then if you’re lucky, you’ll run into a kid at the park or grocery store who’s acting a fool. Try it out on them first.  (You don’t want your little kids to notice you practicing new looks.  They might begin to think its a game.)  Once you’ve scared enough kids at the grocery store, give it a whirl!

If you can’t master this one, none of the others will work.  If you say no, and then give in to the cupcake request, you might be in for a “listen, Linda” conversation. Or, even worse your kid will start believing that no actually means yes.  Try telling no to a teenager who thinks no means yes.  That will not do.  If you know you’re having a hard time saying no, simply don’t say it.  The bottom-line is you’ve got to do this thing at a pace that works for you.  Until you’re ready to commit, just say yes.  As with the “mom look” practice.  Try saying no at times when you know the response won’t be an all out war, and as your tolerance builds for their reaction, do it a little more.

So mamas, tell me the ways you are learning to say no to your toddler.

Muffy Mendoza is an author, speaker and founder of Pittsburgh Brown Mamas, a support group for nearly 4,000 African-American moms in the Pittsburgh region. To further fill the void Muffy has created a line of educational products focused on helping Black moms be the best moms, too. Her first book, The Brown Mama Mindset: A Blueprint for Black Moms on Life, Love & Home, was featured at the 2018 Essence Festival and is currently sold in various cities across the U.S. Muffy champions the beauty of Black motherhood everywhere she goes, even on the TEDx stage. Find out more about Muffy on muffymendoza.com.

Is that your kid’s personality or do they have middle child syndrome?

The Morning Ritual That Centers My Momlife

Tips on Selecting Fireplace Inserts that Suit Your Lifestyle